Thank you for your interest in employment with Law Commission Job Circular 2019. We sure that you will find the better information provided below.Law Commission has been circulated job circular in recent times. This is your chance to share your story and connect with govt.job field in our country. As a hoping for a job, you’ll represent your skill and qualification. It’s an attractive job circular.

Law Commission also help’s us to social economy and condition. If you want to apply for this job,you should submit your application within short time. Law Commission job circular 2019 related all information has been found my website that is bdeverynews.com. Law Commission original job circular converted to an image file that has been given below. 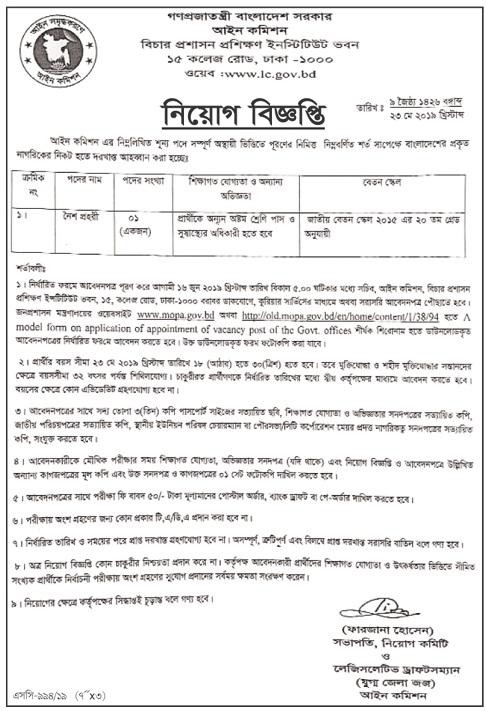 On 29 November, 2004 Mr. Justice Mostafa Kamal the former Chief Justice of Bangladesh was appointed the Chairman of the Commission. After the expiry of the tenure of the member Mr. Justice A.K.M. Sadeque the former Inspector Jeneral of Police Mr. Dr. M. Enamul Haq was taken as the member of the commission 29 November, 2004. The term of the other member Mr. Justice Md. Shirajul Islam was extended for one year more which was end up on 21 February, 2008. His tenure was further extended for one year with effect from 9 March 2008. Mr.Sunil Chandra Paul Former District Judge Joined  on 25 may 2009 as Member of Law Commission for 3 Years. Another Member Professor Dr. M. Shah Alam  Joined on 24 June 2009. Mr. Justice Motafa kamal’s tenure as the Chairman of the Commission ended on 05 December 2007 and Mr. Justice Mohmmad Abdur Rashid Former Judge of The High Court Division of the Supreme Court of Bangladesh Appointed as the Chairman of the Commission for 3 years and  joined on 21 April,2009 and he reigned on 7 october, 2010.